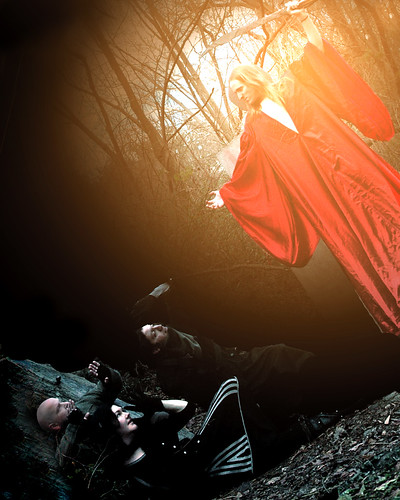 This is the cover of a book, or will be the cover of a RPG, coming out. . .at some point. When it comes out, you can be assured that I will post about it here. But until then, here is the cover. I think it looks pretty good.

I tried some things for this shoot that just didn't work out. Don't get me wrong, I'm happy with the end product on this one, but I did try a few techniques that didn't work. It's a continual learning process, this. I am really very happy with Eric, Kate and Ben, the three individuals that are leaning away from the Angel (as played by Alex). I worked with them to get them to imitate the paintings of shepherds in depictions of Angels announcing the birth of Jesus. The idea was to give the feeling of an Angelic apparition. As always, I learn a lot from imitating the masters. In this case, I learned that having the hands so framing the face creates a much stronger look than, say, having the arms in front of the chest, or outstretched.

I chose Alex because he can sell fury. And he came through for me there.

The color here is very deliberate - I clothed my three on the left in black, white, brown and grey, so that Alex was the only person in color. I wanted to make Alex pop, to seem different from the others.

Jared helped me set up this shot, and was with me through the shooting.

Jennifer Rodgers helped me edit this shot, which was great. When I was in the editing process, I was trying to do several things that didn't work, but Jennifer Rodgers, who is a Photoshop-Fu-Master, helped me a lot. She also was the person who turned this photo. If you look at the ground in the photo, you'll see that it's on a diagonal. In the photo I took, it was level with the ground. Jennifer Rodgers had the idea to turn it. Now whenever I look at a photo, I consider turning it as well. I feel like she gave me a new tool when she did that. 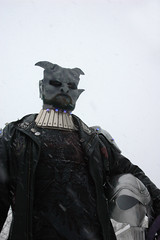 I'm planning the next shoot on Friday, when I'm meeting with my models/makeup artists. I'm planning a shoot where I'd like to make people look like supernatural creatures who belong to a modern military force. Jared has very kindly agreed to be the gargoyle on the right for that shoot, but I still have two more people that I want to have supernatural creatures for. Tomorrow, I'm meeting with my creative team to see what that's going to look like.

In other words, we are going to draw pictures of faces, and paint each others faces, and work on some poses. After that, I start working on prep for my future three photoshoots, all of which will be taken outside. The first one is a low-fantasy conan inspired shoot, for which I'm looking for a dramatic outdoor setting, the next outdoor shoot is going to be a formal garden shoot, and for the third shoot, I need to find the perfect woods.

This means lots of fun location scouting! I've wanted to do more hiking, so this is the perfect opportunity for me to explore various parks, take photos of good locations, and figure out what  I'm going to use for the next shoot. I've been leaning on forbidden drive in the past year, and I'd like to branch out, find some new places to photograph. I'm looking forward to my spring-weather exploration.
Collapse