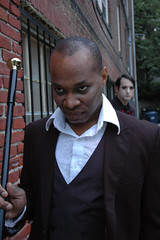 Live Action Role Playing is gaming where you are both the audience and the actor. You appreciate someone's performance while simultaneously reacting to it, and getting into a performance of your own. As I'm considering running my own one-shot game in the fall, I've started to think about what could make this experience better for players

Most of the time, when I discuss making a LARP better, I do it with other gamers, and talk turns to rules. What rules make a game run smoothly? What kind of play resolves conflicts both quickly and fairly? What is the best kind of conflict for LARP, and how does the organizer encourage that particular kind of conflict? All of these things are good things to consider, but recently I've been thinking about the other side of gaming, the theater.

What could I do to make a LARP better theater?

I've seen some of this addressed with costuming and set dressing, and surely, that's a good place to begin. Costumes and sets do help set the scene. But, as I've seen more theater, I've come to understand that it's the actors that really make a show. Great sets do not make up for bad acting, and similarly, brilliant actors on a minimalist set can be inspiring.

And what makes actors perform well? Rehearsal. Rehearsal and good direction. So what if I add a rehearsal on to the game I'm planning  -not for the players, but for the non-player characters who will be directing the action? 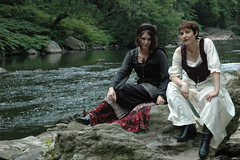 The game I'm planning to run centers around the servants for a bunch of vampires, as they struggle to obey their masters commands - especially when the commands come in conflict to each other. The vampires do not directly influence the action - they lay back and command while their servants obey. But what if I rehearsed the people who played the vampires, so that they felt stronger in their characters, so that they could enact possible outcomes, and decide, before it happens, what some good reactions could be. Perhaps we could invent scenes to "perform" for players -  from polite interactions with sinister undertones to flat out violence .

I've never heard of a rehearsal for a game before, but perhaps there is something in that - something in the idea of crafting a performance for the non-player characters to enhance the experience of the players.

Now all I need is a director.
Collapse