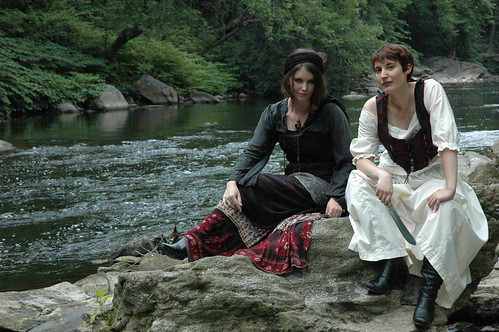 More Mortal Coil Regency Shots! I had fun on this shoot - it involved my favorite things, gaming and photography and stories.

Last weekend I modeled for Mayfaire Moon at Dorian's Parlor. I am trying to find photos of this, but having a hard time. If you had told me in middle school that I would be modeling in my twenties, I would have punched you in the stomach for making fun of me and run home crying.

I now have a total of 6k on Novel #2 or, as I like to call it, Project Mercury. Novel #1, being finished in it's first draft, is being put aside for the time being until I can look at it fresh - likely after I finish Project Mercury - whose final word count is shrouded in a veil of mystery. 25k? 50k? I have an outline, but as I think many writers know, outlines are suggestions and stories can often take on a life of their own.

I'm going to buy a laptop next month. I destroyed two laptops writing my first novel, so I need a new one. A sturdy one. One that can take the novel I am going to throw into it's maw. It's a fantasy of mine that my novels are so awesome that laptops can't actually hold their awesomeness without breaking, but the truth is, both those laptops were old and on their last legs.

Though I like my idea about the Awesomeness best.