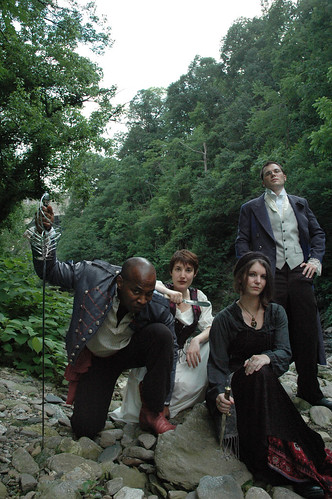 Once upon a time there was a nice man named Brennan who wrote role-playing games. One day, he asked if I would take photos to be the covers of his fantastic and fun supplements for his game, Mortal Coil. Of course, I was delighted to agree. I took pictures of Gods, and that was well and good, and then he asked that I take photos of a tale that took place in the Regency Era. And that is how this photo came to be.

Brennan and I had a hard time figuring out what we would do with a Regency Era cover. So we decided that he would come over and run the game for the models, then we would dress them up as their characters and take photos. As it turned out, this is a great way to do a photoshoot, because the models understand their characters so well, and it's very easy to decide how to capture the characters when they are so well defined.  Gamers know how this is - after a good game, the scenes and concepts from the game are very clear in your head, making it much easier for the models, and for me to pose them.

Besides which, having a game run by it's creator is crazy amazing. If you ever attend a game convention where a creator is running a game they created, I urge you to sign up for it. It's a singular experience. The costumes here are a fantastic mish-mash of created, borrowed, and gifted. Jerry (far left) is wearing Jared Axelrods Steampunk superman jacket, a poofy shirt borrowed from a theater company, and kind of madly, yoga pants. We needed pants! Deva (middle, holding knife) is wearing a wonderful costume that was lovingly crafted by a great seamstress and came into my possession through tragedy, but I hope, in including the beautiful piece in photos and treating it with care, that I can showcase the creativity and art of a great lady. Holly is wearing a skirt  and puffy shirt I've had since middle school, a corset from H&M and scraps of cloth from my and her collection. Steve is wearing his own pants, vest and shirt, supplemented with Jared's coat (which recently was worn by the Duke in 12th night).

Thank you to Jerry, Deva, Holly and Steve for creating these characters and spending the day playing with Brennan and I!