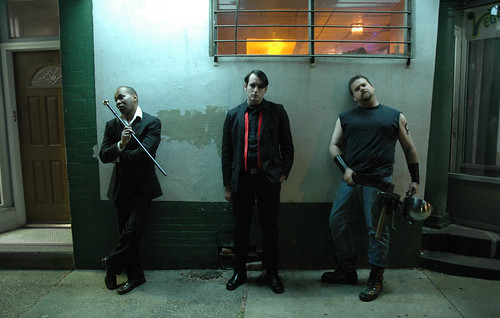 For some reason, the process of finishing up the first draft of a novel is proving to be one of the most creatively rich times I've ever experienced. I have ideas for photo-shoots and short stories and graphic novels that obsess me every single day. I'm about five to ten thousand words away from the end of my zero draft, and I keep thinking about other, really cool ideas.

But I'm not going to give up on this novel for another project, despite the fertile ground my brain is tilling around in. I try not to think too much about the Angel in the Sand, or the Nurse and the Doll in World War Two, or Dr. Mercury (though I am obviously failing there), or the phrase "First, a man named Henry had to die" which is the start of a flash fiction I am NOT working on because I need to finish this novel.

File those ideas away, brain, it isn't time for them yet.

Today I woke up from a wonderfully vivid dream with a great set of characters and a vibrant setting which may be my next project but which I will not write a thing about now because I have to finish this novel.

So, what do you do, to keep yourself on task? How do you quiet your imagination to finish the thing that is so close to being done? How do you file away those good ideas for later without letting them distract you?

Or do you just let them distract you?

Speaking of distraction, the photo above and below are from my "Gods" shoot, which was a commission, and which features Jerry, Russell and Jared as Gods with the talent of Bunny Greene on makeup.