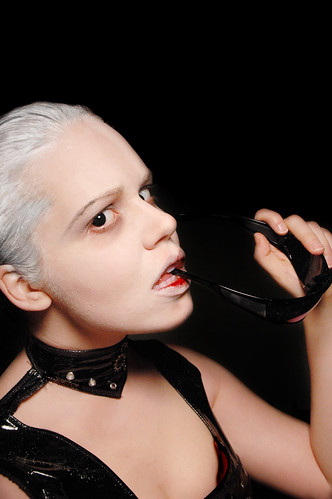 Dr. Mercury wants to play.
Dr. Mercury is a character I invented a few months back who I really would like to play with. I have a clear voice for her in my head, a clear image of who she is and what she's like, and I would love to play with her somehow. I'm drawn to this character right now. It's like the excitement of making a new friend.

Dr. M. is a super-villain, and a smart one. She's got her own internal logic which is narcissistic and sometimes cruel, but often fun. She's a blood drinker, but more for sport than for survival. She's an alien-half-breed from the stars who enjoys fucking with superhero's, the smell of plastic, and lighting things on fire.

The only trouble is, I have no idea what to do with her. Photos? A story? A comic? I'm not sure yet. But it will come to me.