Every time one of my more famous friends mentions me, I get a bunch of new people adding me as a friend on various social networks. Hello, new followers! Welcome, and bon-venue - welcome. I wish I could do a little cabaret dance for you, but I am afraid of video so you'll just have to imagine it. 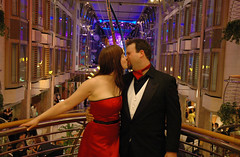 So, for all the new folks, I am J.R. Blackwell. I am a writer and photographer, though I can sometimes be caught doing other things like making puppets, burlesque dancing and podcasting.  I'm married to Jared Axelrod and every day we make out like teenagers. Teenagers who have parents that don't know what the heck is going on. We recently went on our honeymoon, which was great. As you can see by the photo, it looks like we went on some kind of Starliner/Space cruise, but as it turns out, there are cruise ships that look like malls on the inside, and it's every bit as crazy/fun as you might imagine.

I usually have about ten projects going on at once, but recently I've been trying to cut down the project list to focus on finishing my novel. I'm currently about 42,000 words in, and I'm pleased to say that it looks like I'll just kiss 60,000 before I'm finished. This is my focus right now, and it's fantastic to just do one thing.

Which, of course, means that I have only five other projects going on. Haha. It is to laugh.

1. I  write a column for Hub Magazine, called "Roll The Bones" about role-playing, another one of my passions. Hub  is a great place to get free fiction and reviews and such. I have a magnificent editor who indulges me and lets me be my insane self.

2. I love photography, but then again there, I am trying to narrow my focus. I've discovered that what I love about photography is creating characters and fantasy situations, so recently, I've been trying to focus more on that. I recently took a project for a friend that is doing just that, and it's been brilliant. I have a couple photography books that are in the 70% finished range, but I've put them aside while I work on my novel. When I finish my novel, I think I'll try to finish the books too. 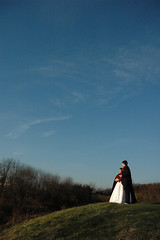 3. I photograph weddings, which I have a real and sincere passion for. Watching people declare their love for each other is a joy for me. It's exhausting to photograph a wedding, but it's the best kind of exhausting. I'm honored that so many people have made me a part of that moment for them.

I'm available for hire if you want me to shoot your wedding. On the upside, I'm cheap. On the downside, I don't do prints or albums and I won't edit all your photos. I just shoot the wedding and send you CD's with about 600-800 photos. So, you save on money but you might not be getting all the services other photographers provide. One of my friends described me as a wedding photographer for the DIY bride, which is pretty accurate.

4. Last year Mur Lafferty and I created a story called "Her Side" which will be available for preorder soon. You can read the whole thing online, but the book, designed by Daniel Solis, is a work of art. I cannot wait to hold it in my hands.

5. Okay, this project is a secret, and the truth is, I'm not doing anything on this right now except for thinking about it. It does involve a trip to freakin' New Orleans, which thrills me to my little geeky bones. 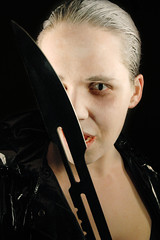 There are about twenty other things that I want to do, but it turns out that I need to have time in the day to go to the day jobs, eat, sleep, and do laundry, so, that sucks. But if I were independently wealthy, I would devote myself to exploring Dr. Mercury, a character I invented who is a Star-Child Super-Villian who drinks blood and eats stars. Stars and Pie. I don't see her so much as a vampire as a creature who just likes the taste. Seven pennies in this martini please!

I have no idea what I'd do with this character, but a swear, she calls to me.

I occasionally collaborate on projects with my friend Rae Winters, who has promised to take photos of me in the fat suit and beard. Rae is awesome.

Where else can you find me, as I attempt, and fail, not to take on new projects?