I knew I would learn many things as I photographed weddings - techniques for wrangling large groups of people, how to best pose a young lady in a huge dress, how to please people that have different ideas about what they want their weddings to be.

I never suspected that I would have a lesson in mythical creatures. But yesterday I learned of a mythical beast (though perhaps "creature" is better, as he takes the form of a handsome young man) called Rock Lobster Guy. This is how it happened. 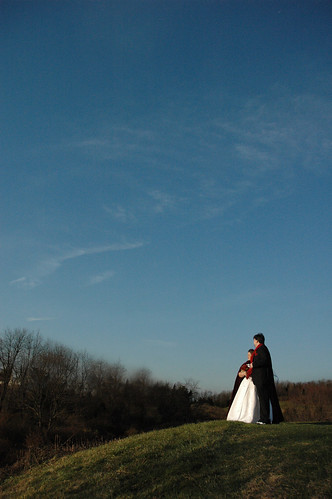 The wedding I photographed yesterday was in New Jersey, and the couple getting married was delightful, and clearly loved by all who know them. But it was at the reception where the whispers of a mythical visitation began. "Rock Lobster Guy." they whispered "He may come tonight!"

Apparently, if you have lived a Righteous life, if your love is True and your wedding is Just (and takes place in New Jersey), Rock Lobster Guy will appear and dance at your reception. Part Bacchus, part bigfoot and part satyr, Rock Lobster Guy is a creature out of myth, and comes from the hall of the Gods. He will dance not just any dance, but a special Rock Lobster dance, which will bless your wedding and the crowd and cures one person in the reception of their dental problems.

Of course, you can't demand that Rock Lobster Guy come to your Reception, nor can, even if he shows up, you demand that he perform his mystic dance. If you do, he'll just leave, and then, someone will get a flat tire on the way home from your wedding. You cannot even ask the DJ to play the song, hoping that will make him appear. If Rock Lobster Guy is going to bless your wedding, the DJ's equipment will buzz and rock on it's own, the CD will skip, and no matter what is pre-loaded, Rock Lobster will play.

When Rock Lobster Guy began dancing, the crowd, in his trance, gathered round' and all suddenly knew the steps to his sirin song - we dance, and time seemed to pass very slowly, as if we had spent a day dancing, though when the song stopped, it was as if no time passed at all. When it was over, I marveled that I was a part of that moment - but since all of us were commanded to dance, in the sway of his power, there are no photos of that moment.