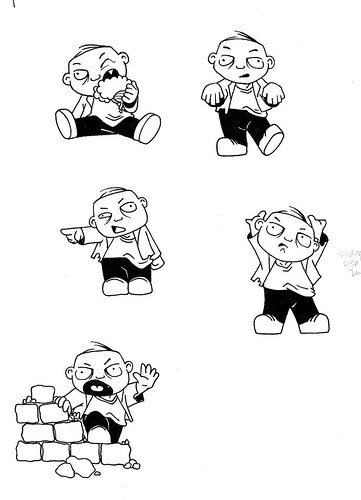 Meet Fred. Fred is the adorable zombie mascot for my game, "Shelter In Place". "Shelter in Place" is game of Zombie Horror with a twist. My goal was to create a game that captured the suspense of a horror movie. But more than that, I wanted a game that was easy for new players to understand but that would still give experienced gamers a challenge. If I had three words to describe the game, I would say it's frenetic, cinematic and fun.

I wrote the first edition of "Shelter In Place" last summer, and it was play tested for the first time that fall, just a few weeks before my wedding. I remember that it was a Saturday night, and though it was still light outside when we started, a full moon was shining in the sky - which was an excellent omen indeed!

The quote of the night comes from Kate who said: "I screamed for real." That sentiment sums of the feeling of the game nicely.

One thing that surprised me in playing the game was about the traditional zombie shamble. I told the zombies that they could not move at a run, that they must move only at a walking pace. Originally, I thought that might be a problem, that the humans would just easily outrun the zombies. Who hasn't watched a zombie move and thought "Oh, just outrun them already!" In practice, the zombie shamble is far more effective than I could have imagined - because the zombies just keep coming, and humans, bless them, get tired of running.

The panic and the intensity in the game was real. I saw people run for their lives. At one point, a human was stuck outside the shelter, and those inside, knowing the threat he faced, wouldn't let him in until he fulfilled a task for them. They were willing to let another person die if he didn't fulfill their goals. There was begging and pleading and not enough rope or wood or food or anything to defeat the zombie horde.

And everyone had fun.

Of course, there were some technical tweaks that needed work, but my biggest fear going into this is that the concept would be off, and that no one would have fun playing. As it turned out, everyone had a great time, even with some technical problems.

After the game, players told me they felt like they were in a movie. Even the players who had first played zombies felt the anxiety of being locked in a compromised space, of having limited resources and their sanity being whittled away. Even knowing what was coming didn't diminish the experience.

I've resolved the technical kinks in the first edition, and now "Shelter In Place: Second Edition" is ready to rock and roll. I am thrilled to announce that I will be running "Shelter In Place" this Saturday at Dexcon 2009. The game will kick off at midnight. The organizers have been so kind as to give me an excellent spot to run the game in.

Dexcon is a wonderful convention in that it's got a wonderful community feeling. The people that run the convention have a passion for new games and concepts and and understanding of what makes games succeed. I'm excited about providing a fun and cinematic experience for the players, and I'm thrilled that I'll be able to run the game there.

Fred is drawn by the very talented Calli Archer who has promised me more Fred, which is good, because I just can't get enough of him.

(What's the twist? I'm not saying. You'll have to come to a game to find out!)
Collapse