After most conventions, I feel a little drained, even if I had a good time. After Balticon, I feel energized, ready to take on new projects and revitalize old ones. At Balticon, I get to connect with my community, my friends, people who I’ve been keeping in contact with through the internet and some parties but many of whom I haven’t seen in a year, sometimes more. At Balticon we get to put our heads together, talk about our plans, share trade secrets, celebrate successes and support each other.

It’s one of those conventions that’s at a great point right now – small enough that you get to connect with people, large enough that you get to enjoy a variety of content. Also, like the best conventions, people aren’t just there to buy stuff and meet celebrities, they are there to learn, to connect, to discuss and debate. Panel attendance is high – most panels I was on last year were packed with people.

I met the man who put my covers in bookstores at Balticon. I met the woman who sewed my wedding dress at Balticon. Because of Balticon, I now know a host of filmmakers, writers, voice actors, photographers, actors, musicians, entrepreneurial wizards, editors and, most importantly, friends. When I met these people I felt like I had finally come to a place where people don't just complain about things, they create. Where people don't drink to forget how shitty their lives are, they drink to toast their successes. Where people aren't jealous, they're supportive. Where people take joy in each other's success and happiness and support each other through hard times. Where people will support your work, challenge you creatively, and show up to cheer you on. Where people are generous with their times and talents and in return, will accept your generosity. 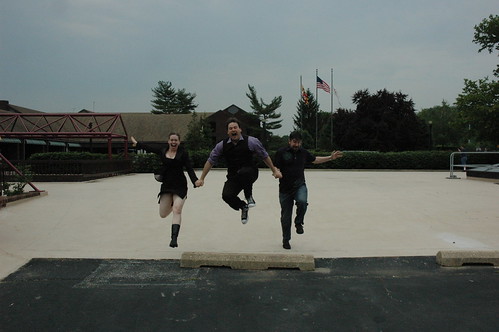 This is my schedule for the Con. I am very excited.

I am honored that I was invited to be a voice actor in the Escape Pod Live this year. Jared and I are voice acting characters that are a couple. Natural chemistry!

So, apparently I’m on this panel with Christiana Ellis and Jared Axelrod. This is awesome, because they are both hilarious and unpredictable. Honestly, I have no idea what might happen here. All of us tend to feed into each other, so while this may end up being a nice calm panel about working on projects daily, it might also turn into some kind of weird comedic performance art. Someone may lose their shirt. Or an eye. I promise NOTHING.


Live! Aliens You Will Meet - Sat 3pm – Chesapeake
More puppets, musical guests and a cast of awesome. Jared and I have purchased supplies from ALL OVER in order to create these puppets. I think we’ve discovered the secrets to creating awesome bodies for puppets. We did this by giving money to pros, which is really a good strategy. The shoulders of giants are there to stand on!

Mr. Adventure is hilarious. I’m always happy that I get to take part. Rich, the creator, always wants me to do accents, and I suck at accents! I always try my best though and it’s really flattering that he continues to believe in my skills even though my major suckage. Thanks Rich! My Dad is going to be around on Saturday and he is the King of accents, so maybe he can help.