Thank you to everyone who responded to my poll yesterday! It certantly caused a great deal of good discussion, and gave me a lot to think about. It was nice to hear such diverse opinions.

In the interest of a fair and balanced journal, today I will be discussing Cupcakes. 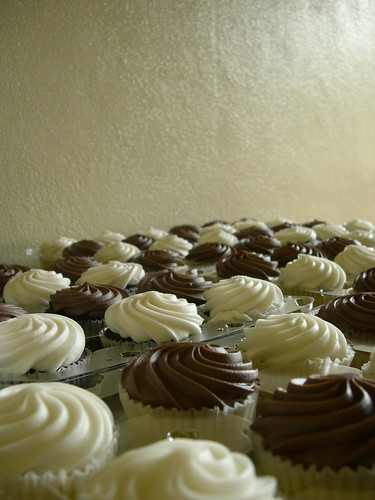 Jared and I enjoy Cupcakes a great deal. After the discovery of Flying Monkey Cupcakes, an establishment that will give you the best possible Cupcakes can can be procured within a 50 mile radius of our fair city, our love of the little cake has only grown. As is our way, we have connected our love of cupcakes with our love of words.

Much in the way a large number of ravens is referred to as a "Murder" of ravens, we believe that Cupcakes should have their own special numerical monikers. For example, a specially LARGE cupcake, say, that bigger than your fist, should be called a "PUNCH" being that it is likely to hurt you when shoved into your face.

Here are some other suggestions for referring to certain numbers of Cupcakes. Have your own suggestions? Please let me know!

A Duel of Cupcakes = Two Cupcakes

A Brawl of Cupcakes = 12 Cupcakes

A Battalion of Cupcakes = 100 Cupcakes

A Regiment of Cupcakes = 500 Cupcakes

And, as Jared has reminded me, the all important Scuffle of Cupcakes, which is however many cupcakes are leftover at closing. Why didn't the black pepper and lemon cupcakes sell? We may never know, but you can take them all home in a Scuffle.
Collapse