On Sunday, July 13th, Matthew Wayne Selznick’s novel, “Brave Men Run” was published by Swarm Press. It made a remarkable splash, climbing the Amazon ranking into the top 100, number 10 in genre and number 1 in movers and shakers. It’s an amazing accomplishment.

Jared Axelrod designed the cover of this wonderful book, and he used two of my photos to do so. Two of my models, Amanda and Steve, are on the cover of the book, looking fantastic, and I’m glad to see them there.

This is what happens when you pose for me, I tell you we’re going to trespass or pretend to be Hamlet or something and you end up on the cover of a bestselling book. 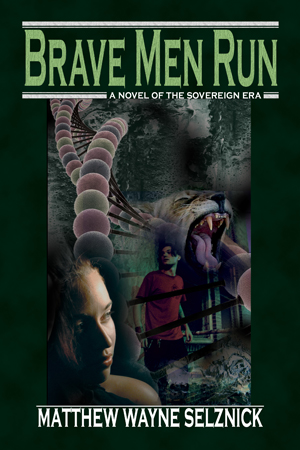 My story is called “I Wear My Sunglasses At Night” and was described by a listener as “The X-Men Breakfast Lost Boys Pretty in Pink Club” which is actually fairly accurate.

Matthew Wayne Selznick released the videos of these stories being read here:
http://www.mattselznick.com/writing/fiction/novels/brave-men-run/webathon/

I am so honored that I got to be a part of this event, and so proud to slip Matthew Wayne Selznicks book into the shelf of books written by friends. It’s a shelf that grows every year and my favorite spot in my library.
Collapse