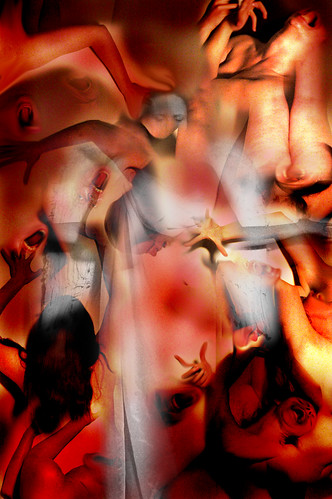 Yesterday was devoted to writing. Between Jared and I of us we probably wrote about five thousand words and cut about two thousand. It's nice to be able to write with someone who you can stop and read lines of dialog too, and who can seduce you with beautiful descriptions. It was a wonderful nine to five sort of day, writing and editing, breaking for lunch and then writing again. At the end, we both had stories we liked.

I'm so used to squeezing writing in between the paycheck job and photo appointments and other obligations. To take a full day and just write was a pleasure. One I hope we can make time for again.

This photo is an example of me pushing myself with regards to my photoshop skills. In the past, I have largely avoided the use of photoshop in my photos - not for any reason of snobbery, but because my skills have been such that using too much of the tool would make the photo look "shopped" and would. . .well, I'm not sure how to say it. In writing, I would say that the technique would "take readers out of the story", but I'm uncertain of how to say this for a more visual art. Rather than observing an image to be what was portrayed, viewers would see the image as a product of photoshop. I would rather you see the Inferno of Hell than a computer program.

I've taken this 365days project as an opportunity to challenge myself on a variety of skills. I'm including photoshop in that challenge, since it is such an essential tool for many photographers. I feel that I've improved from the start of the project, largely due to the intervention of those with far finer skills than myself, and by watching tutorials on the internet. I believe I used to use about 30$ worth of photoshop. Now, I am proud to say, that number may have well reached 50$ or even 60$. I'm not sure when I'll reach full price. I'm sure that when I do, you'll be able to see it.
Collapse