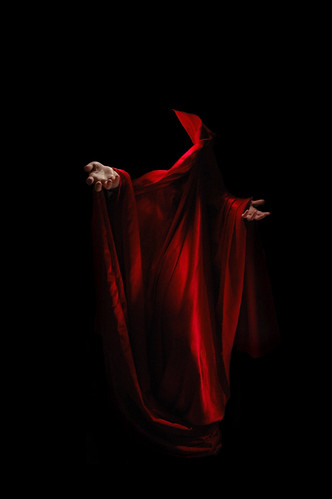 I have been working on this concept for several days, the idea of a missing body in a picture has been fascinating to me. I really think that today, I nailed exactly what I wanted out of this photo. I had a picture in my head of draped red robes, of a missing body, of the implied exposure of the body without the body visible.

The title, Teiresias, is taken from a character in a play I was in once. Teiresias is a seer. Seers are the vehicle for a message, and thus I think it is appropriate for a photo in which the body is invisible.

Jared Axelrod draped the robes in this photo and suggested that I keep the hands, which was a good instinct.