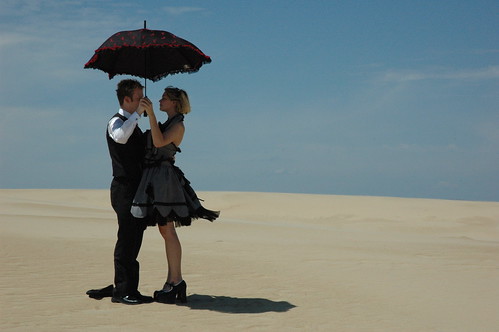 This past weekend, Jared, Alison, Nick and I went to the Outer Banks of North Carolina. There, we planned my wedding to Mr. Jared Axelrod, but also, we took some time to take photos on the stunning dunes of the outer banks. Alison and Nick have wonderful clothes (Alison is wearing her birthday present) and are fantastic models.

Beautiful people, a stunning setting, I really couldn't lose. Nick was inspired by the shoot and wrote a story to go with the photos. Enjoy!

We still don't know what happened. I had it all planned out, the rest of our lives, and I had the ring, and had planned a picnic, and everything was going to be perfect. Then there was a flash and the sky looked like it was bleeding, and nothing was the same after that.

I don't know how long I was out, but by the time I woke up, she had been awake for hours, and had already scouted the area. "There's nothing left" she said in a matter-of-fact tone.

We've been wandering for days, with only my trusty parasol to protect us from the elements. At least we still look good.

(In memory of Nick's parasol which died a noble death during the shoot.)
( Collapse )
Collapse