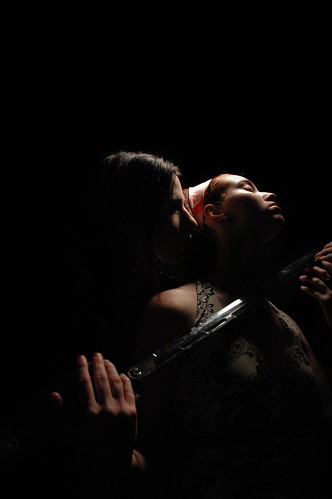 In theater, Hamlet is traditionally played by an actor in his early thirties. It’s a hefty role, one that requires a great deal of talent, so I understand the desire to cast someone who has experience in the role. However, the more I think about Hamlet – his angsting, his family issues, his identity issues, the questions he has about life and his role in society, the more he seems like a teenager.

This is very apparent, to me, in his relatioship with Opheila. Rather than tell her what’s wrong, he acts crazy, he’s cruel, he tries to drive her off. When I set this behavior in high school, it seems all too familiar.

In this shoot Daniel and Amanda helped me to create a teenage Hamlet and Ophelia. They’re youthful appearance, beauty and general talent was such a gift. It was a pleasure to collaborate with them. I hope we get to do it again soon.
( Collapse )
Collapse