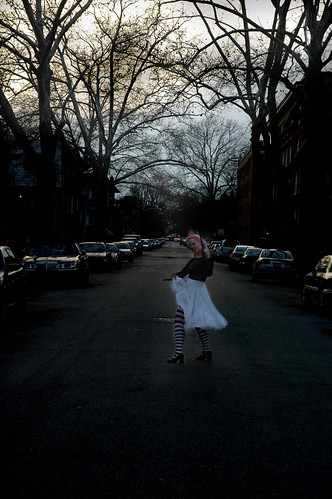 While this isn't my first outdoor photo in my 365 Days series, I do hope that it marks a new begining of outdoor photos. My mother, who was watching the camera while I was outdoors (I live in a city and refuse to just leave it sitting alone while I run off with a remote) said that I should get closer. However, I was far too excited about the idea of having space to get close. Right now, I'm enjoying the distance.

I started putting together my 365 Days book this weekend. I am going to be splitting it up into three volumes to keep the price down. I want to sell the book for under 30 dollars. If I do a collected volume, which I may, it will be hella expensive just because of the cost of pages and full color quality photo printing.

The first book is going to have 122 photos - many will be small but some will be quite large. I think I want to focus on a few interesting photos, write about them and write about the process of taking all of them. Photos will not be grouped by day inside the book (though day will be noted) but will instead be grouped by theme.

I think I also want to include which photos were sold, and if the buyer permits, who bought them. If the buyer doesn't want to be named, I'll just put them down as "private collector". The amazing group of people who bought the photos - artists, writers, programmers, scientists, homemakers, filmmakers, is worth mentioning to me. The fact that so many of them went so quickly never fails to astound me.

I started this project to learn. That is my main goal. I know that a daily project helps the learning process immensely. I wanted to be better in 365 Days, I wanted to grow. I knew that my photography would improve. I never expected all these other improvements as well. To my self esteem, to my way of life, to my relationships. I didn't expect to feel so appricated. So happy. I feel like I'm on the right path. My own path.

I hope to release the first volume in a month or so. We'll see how much I can get done. I'm still working on projects for other folks that I need to finish first.