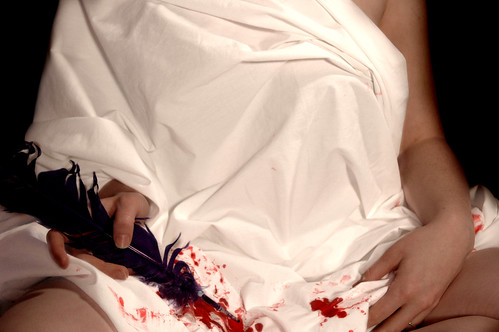 
Those of you at Farpoint Convention will remember that I gave a reading of a story in progress that involved tenticles, feminism and old gods. Today, an edited version of that story went live on 365 Tomorrows. Some of you at the reading may notice that there are parts missing from the story. I promised that you would get the complete story (there were actual gasps when I stopped reading!) so here it is. Enjoy!

“When the Surface became too crowded, Man had already hollowed out great caves in the crust of the Earth, mined for metals with which to build his towers. It was simple for those who desired space to move downwards, founding the first cities of the UnderEarth.”


-Except from The Laws of the UnderEarth
Testimony of Arla, The Insane

Eleanor was burning, her pelvis felt blistering to the touch. Her breath came out wet and hot, like steam from a kettle. She stumbled forward in the darkness, one hand on her swollen belly, the other clutching the cave wall

Eleanor thought again of turning back, of the hospital of Under Shanghai, its doctors clad in sunflower yellow. Then she felt the Fury, like before, that wash of emotion that had driven her deeper into the uninhabited caves. She steeped forward into cold, wet mud and the Fury abated, as it always did when she Obeyed.

“In the Late term of her pregnancy, Eleanor left the civilized cities of the UnderEarth for the Orpheus caves. Though her family pursued her, they found that recent cave-ins blocked their way. Eleanor path had been erased. “

Laws of the UnderEarth
Testimony of Samuel, The Loved


Eleanor cried out with another burning contraction and stumbled into the mud. She crawled forward, the blue light of her glow necklace showing only her muddy hands and darkness. Eleanor heard the soft gurgle of water ahead and the sound made her thirsty. She wanted to embrace the water, to be surrounded by it, to drown.

“The Gods of the UnderEarth do not slumber, but they can awaken. Preserve Silence.”

-Laws of the UnderEarth
Testimony of Arla, The Insane


Eleanor touched the surface of the lake. She slid into the water, like a bubbling volcano meeting the sea. The light of her glow necklace reflected off the surface of the dark water. The caves extended farther than her light could reach, deep and long.

Eleanor leaned her head into the cool mud on the shore and let her body float in the water. Her contractions quickened and she felt her molten center squeeze, pressure building. She cried out, feeling herself tear, her blood leaking from her, the intensity building, pushing out from inside her body.

“Silence is not the absence of noise; it is the presence of the self”

Laws of the UnderEarth
Testimony of Samuel, the Loved

She felt the Fury approach, close, closer and then there was cold flesh, snaking around her legs and arms and neck. She struggled, burning, her baby fighting inside her. The wet flesh slapped against her neck, pulled her under and pushed her up, gasping. Eleanor screamed and then her mouth filled with water. The Fury pulled on her throat and Eleanor sobbed, coughing. She pulled off her necklace, her only light, throwing it back the way she came, back into the dark.

The Flesh became soft, supple, and supportive. It cradled her. Eleanor felt something scratch the small of her back and she relaxed, cold and calm. The contractions were coming fast now. Eleanor felt her body pushing and some other force pulling the child out of her. Instead of the Fury, Eleanor felt the silence, vast and old. Then she was empty.

There was a splash of moving water and Eleanor felt something rise before her in the darkness, something massive. The flesh around her quivered and she could see, in dim outlines, thin shapes snaking towards her.

Her eyes adjusted and she could see a black outline in the dark, tentacles and the shape of her baby. Eleanor squinted and thought she saw glistening eyes and dark moving shapes. Eleanor reached out for her child, towards the huge, alien shape.

The baby’s eyes opened. Its pupils were red as lava. Eleanor felt the flesh around her quiver. The mind that had touched hers, great and old was deciding if it should keep the baby or sink back into the water. Eleanor felt her mind go clear, go dark.

The UnderEarth God enveloped the baby for a long moment. Then it held the infant out to Eleanor. She took her baby and brought its molten mouth to her breast.

“Lenora and her mother Eleanor emerged from the cave two weeks after she entered. The cave in that had blocked them in crumbled, allowing them to pass. Lenora was hot to the touch, her skin black as cinders, her eyes molten. Eleanor was like ice-water. When they touched each other, skin on skin, they both let off a soft steam. Eleanor carried her in a mist when they emerged back into the cities of the UnderEarth.”

Laws of the UnderEarth
Testimony of Xia, Consort of Eleanor, The Mother
Collapse