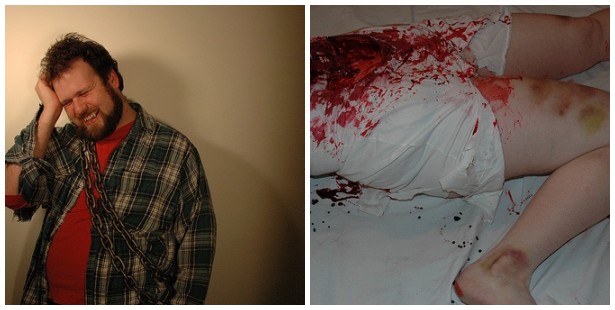 Obviously, I cannot get a Wolf Man to eat someone. That would take a lot more money than the short-sighted idiots funding my research are willing to provide. They would not even allow the Wolf-Man I so cleverly found to shape shift in the lab. I did catch a hint of canines though, through entertaining him with my knowledge of science.

He tells me his ripped shirt has nothing to do with his animal nature. Apparently, he's just, as he says "Rough and Tumble". He also assured me that the chains were for his bike, although I doubt that, because I see a lot of the Wolf People carrying around chains. I do not know what they use these chains for, but they are heavy and long and nearly every one of them carries them.


The photo on the right is from a case I was a part of a few years back. Everyone thought it was the boyfriend, or the ex boyfriend - but when they brought me on the case, I knew it was a wolf-man.

Neither her boyfriend or her ex was a wolf-man. We tested them, her whole family, all her close friends. I had to dig for the answer. Finally, her mother told me she had gone to her ten year high school reunion just a week before the murder.

Wolf-men are jealous, and they mate for life. When her high school boyfriend smelled her with the scent of her current boyfriend still on her, he went crazy. Ate her liver.

(Thanks to Dr. Cmar on his advice on the tastiest of human organs! Also thank you to my roommates, who are perfectly fine with me walking around the house covered in blood and making giant messes in the basement. You guys rock!)