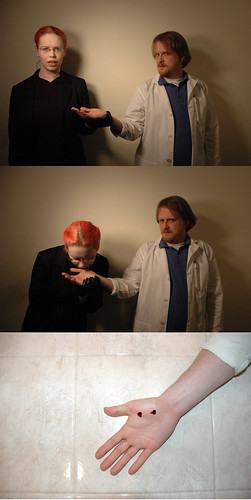 In my line of work, I often come across a great deal of ignorance from my colleagues who cannot distinguish between the various bite marks of supernatural creatures. I have seen enough to know that this line of inquiry is underdeveloped. It is important to examine angles of attack, common penetration points and distinguishable markings. To remedy this deficit in knowledge, I am creating a codex of sorts, of various creatures and their associated bite marks.

Obviously, because of certain narrow minded individuals, I do not have access to all the supernatural creatures I require to complete my studies, so examinations will hinge on some speculation of attack and some case file studies. I am confident in my own ability to identify marks and those creatures who leave them.

I will also examine the details of how to tell a consensual from a non-consensual feeding. This is difficult to distinguish, but worth looking into. Many of my short-sighted, inane, narrow-minded colleagues seem to assume that all feedings are non-consensual, which only shows how out of touch they are with the world, living as they do in their bullshit towers.

Seen above is the common western vampire in the process of feeding on the soft area of the palm. The participant, female western, age reported to be fifty four years was paid for her participation in the study with a generous fee.On the right is my lab assistant, Thomas, who refused to let his last name be used for this trial for reasons of privacy. If he wants to get ahead in science, he will have to learn to publicly join the community of scientists. (If I have to do it, so does he.) He would not allow the participant to feed from any of the more interesting entry points (inner thigh, throat, behind the knee) but consented to a palm feeding. Although he complained about being a subject in this trial, he was perfectly safe the whole time. The unnamed female western vampire came with high recommendations from trusted colleagues who frequent certain establishments that provide this as a service. Under other circumstances, my assistant would have to pay for what he went though. He should feel fortunate that he got to do this for free and college credit.

(Note the distance between the two fang marks -quite small - indicating that this is a female bite. Wonderful! If you note this in victims, remain open to the possibility of a small male or child.)

The palm is a more common penetration point than is commonly thought, especially for consensual donation. As you may note, the supernatural creature used gloves for this trial. This was to minimize the skin to skin contact that is often associated with the numbing, stupor feeling most victims associate with the bite of the common western. However, the significant venom in the bite could not have been avoided without damaging the experiment. My assistant was very vulnerable to the venom and reported that the pain was quite manageable. In fact, it was hard to rouse him afterwards, despite the fact that he still had chores to perform for me. Next time, I will make him clean the lab before he gets to participate in another experiment.

(Thanks to Dr. John Cmar for the consultation! Also: Thank you Brendan, for being the nervous lab assistant. Your facial expressions make the picture.)
( Collapse )
Collapse