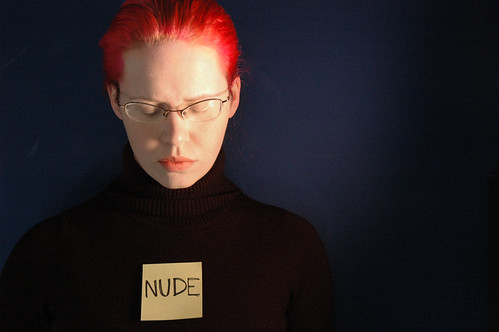 
Every artist is aware of the fact that the viewer or consumer of the art affects the perception of the art. Perhaps some sort of divine power is able to perceive art objectively, but for the rest of us mortals, we all come at it from our own unique perspectives carrying our own history and preferences and sense of beauty and symbolism along with us. I'm totally aware of this fact. What I wasn't aware of was the extent to which the viewer could change the piece in their own mind.

That's where I was wrong. Apparently, that is precisely what is going on.

All this is fine, except that I don't show any tit on the Internet. In my entire flickr collection, 895 photos, there is one nude. That's right, just one. And it's not me. It's a photo of a beautiful pregant woman in the first term of her pregancy. It does not show any bush or tit. There is nothing in the photo that you couldn't see on any beach in the summer. In fact, there is nothing in any of my photos that you couldn't see on any beach. Cleavage, male tits, bare backs, exposed legs - you can certainly see ankles if you want to, but no female tits, no dick, not even butt crack. Among my other photographer friends, I'm somewhat of a prude.

I respect and adore the photographers I know that do nudes, especially self portrait artists. If I felt the desire to explore nudes, inspired by these fantastic people, I would. However, I don't feel any need to explore that in my work, nor to share it with others. It's not part of the story I want to tell at the moment. What I'm very interested in is transformation, the way people can change in the context of certain scenes. I'm much more interested in clothes, costumes and makeup than in the themes around nudity. But this isn't the point. The point is that even though I'm not doing nudes, people are still imagining titties onto my photos.

One model who posed for me told me that she was concerned that I would expect her to do nudes from what she's seen of my work. I assured her that there was no pressure to do anything she wasn't comfortable with. Then I talked to her about the total lack of nudes in my portfolio. We had a great talk about it, why people might see explicit photos where there weren't any, and what might influence this perception.

But the lack of nipples in my online portfolio doesn't seem to discourage anyones thoughts that they might be in there somewhere. I am often friended by porn collectors on my online social networks. I think they've friended me in the hope that I will eventually give in and produce nudes. Unfortunately for them, that's just not the case. Not this essay, not my photos, nothing will be able to stop the perception of nakedness. I suppose I could be upset about this, throw a fit, ask people to look at my photos differently, try to force people to see what I want them to see. But that's not the point. If people want to see nudity, they will. I've learned a valuable lesson. I thought that there were limits to how a viewer might see a piece, that people might look at a photo and maybe think it's happy or sad, but they wouldn't dispute that blue is blue or red is red or if the photo was a nude. I've learned that perceptions can extend as far as the viewers imagination, and that art, taken as a collection, can generate a collected impression of the art and the artist. It's a good lesson, one I needed to learn.
Collapse