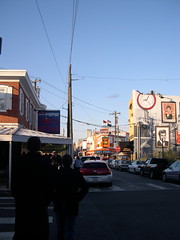 I have spent hours discussing the merits of various cheesesteaks around Philadelphia. If you recorded discussions I’ve had about the various merits and flaws of cheesesteaks and the places that sell them, you would probably have about twelve hours of audio. The cheesesteak is a controversial topic in Philadelphia, and were you to ask five natives of the city, you may get pointed to five different restaurants as the “only” place to get a true Philadelphia cheesesteak.

Generally, tourists will stop in any little shop to get a cheesesteak and will usually load it up with peppers and whatever other crap people push on them. Clever tourists think that they have found the true Philadelphia cheesesteak when they head down South Street and line up at Jims, where during the summer; there is always a line around the corner. Now, Jim’s is good, certainly, but is it the best? Would I say that fulfills everything a Philadelphia cheesesteak has to be?

See, the Philadelphia cheesesteak is immaculate. It is bread, meat, cheese wiz (not provolone, you goddamned sissy) maybe some onions and a sense of impending death. Nothing more. Peppers? What the fuck are we? Goddamned Gourmets? I don’t think so. Onion is the strongest vegetable element that can be allowed near a cheesesteak, and even then they must be drowned, fully drowned, in grease in order to really fulfill its destiny.

You are not really eating a Philadelphia cheesesteak unless all of these elements are rolled together and stuck, all greasy, into a bun. At Jims you certainly get a Philadelphia flavor, but if I took you down to south, you wouldn’t think that I was taking you someplace in order to kill you, and that’s the problem. More than once, when taking some visitor to the city to Pats* they’ve leaned towards the front seat and said “Do you know where we are going? Really?” and then “Are you taking me somewhere to kill me?” because that’s exactly what it looks like you are going to do, and that is part of the experience.

What brought about this rant on cheesesteaks? The Food Network. I saw Bobby Flay challenge Tony Luke, of cheesesteak fame, to a throwdown. I didn’t bother to watch who won/lost whatever, but I did see Bobby Flay talk about the ingredients that would go into his cheesesteak, which involved something along the lines of mushrooms and peppers and fancy cheese. I think most native Philadelphians would agree that while you can make a decent sandwich with those things, you can not make a Philadelphia cheessteak with those elements. They are not immaculately balanced with grease and flavor. Ultimately, peppers or mushrooms would overload the sandwich, and dominate that thinly sliced meat and bland cheese.**

Unwrapping a Philadelphia cheesesteak and looking into that opening maw of meat and cheese, you have to know that eating this will bring you one step closer to death. It is one more bit of clog around your heart, one more love handle to your stomach, a few minutes off the end of your life. And you eat it in a place where you think that your body could be easily hidden, under a bridge, into the water at the docks. And it is delicious.