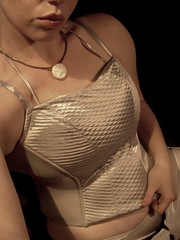 You might not be aware of this, but J.R. Blackwell is a man. Well, at least according to DiddleDog Magazine, who published my story The Surprising Events of Springtime in Rodchester in its fall issue. Check them out, they are a neat online magazine, nice clean lines, easy navigation, cool stuff.

Some people might be offended if someone assumed their gender incorrectly, but I like my life with a little gender ambiguity. It’s not really DiddleDogs fault, when I wrote my cover letter, I said “I” not “she” when referring to myself. And really, I have to admit, my name is gender neutral.

Now, I’m not a transsexual (I’m more of a tranny-chaser, because gender ambiguity and crossing borders is sexy) but I think it’s fun when people imagine I’m a boy. I remember one blogger who wrote that no one should read J.R. Blackwell because he’s a big asshole. The blogger had read my stories on 365, but never met me and never even bothered to look at the page about me on the site, where next to my bio is a picture of a girl, with, yes, a hint of boob. For some reason, this blogger imaging some guy out in cyberspace was really funny to me.

My gender isn’t really something I like to keep a secret, I think that many of my self portraits publicly betray my dimensions, but the assumption that I’m male, that I write like a male, that I somehow, before you meet me, come off as male, this is fascinating stuff.
Collapse