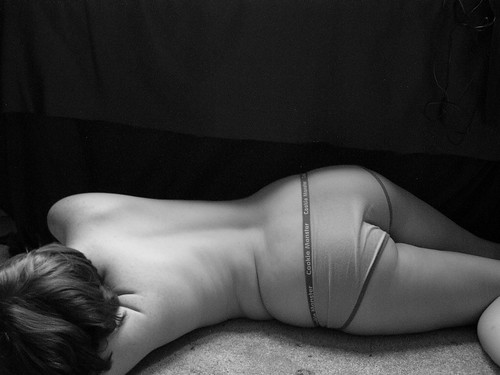 Why won’t I show you my breasts? I mean, I like you all well enough. Anne Frank and I agree with each other about the believing people are good at heart, so why won’t I show you some tit? When I think about it closely I realize that I don’t have a problem with showing you my breasts in person; I just have a problem with posting the digital images on the internet. If I like you, and it’s important to you, I’ll show you the girls, no big deal. It’s just flesh; I don’t attach anything sacred to the viewing of it.
I recently attended a gallery where Lithium Picnic was having a showing. Picnic’s work is clever and sexy. Dispite the risks of work being stolen, and it sometimes is, he is good enough to share much of his photography on the web. At the gallery, I was delighted to see some photographs I hadn’t seen online. Lithium Picnic takes amazing photographs of bands and beautiful women, and is well known for taking photographs for the Suicide Girls. When I went home, I took another look at the Suicide Girls website, specifically, their modeling application.

Suicide Girls is, in my opinion, the best kind of porn. It’s sexy, but the girls viewed as people as well as sex kittens. They are the alternative girl next door, and Suicide Girls (despite some problems they’ve had) does try to recruit women of different races and sizes. If there was any website that I would apply to model for, it would be them. They have a decent pay rate and a good community. The Suicide Girls use their modeling to promote their art and build a career. Many of them have been successful in doing this. They are beautiful and talented, and I would be lucky to be among their number. I like taking self portraits and I know some excellent photographers who I’m sure would help me produce photo sets.

So why wouldn’t I? Is it that my family would disagree with this choice? They would, but if I felt strongly about it, I wouldn’t let that stand in my way. Is it that I could get fired from work? Perhaps, but then again, this is a crappy job I don’t really want to be doing anyway. If I was a model, I could spend time doing things I like; working out, writing, reading, and visiting other artists. The freedom of making my own schedule is appealing. So why not?
When I examine my motivations, it comes down to two points, fear and priorities. I hate to admit it, but fear is a factor. Fear that other people won’t respect me, fear about what people may say about my body, fear of rejection from my family and work. I admire the women that charge through this fear, because for me, it’s a giant, stalling emotion. It’s the strange thing about fear, that one cannot simply work though it once, but must confront fear again and again. I can swallow fire, walk on nails and shrug off rejection letters, but I’m too scared to show you some tit.

The other element of my choice is priorities. Do I want to model or do I want to be a photographer? Life is about choosing how to spend the short time we have. I know what I really want to do, and modeling isn’t it. I enjoy being in front of a camera, but I love being behind it more. I’m a storyteller at heart, and I like having characters to play with, posing them and making a story.  I would rather be the photographer than a model.

I like modeling for my own photos, but I see my self portraits as learning experiences, as gearing up for when I have a model to work with.   I’m willing to waste my own time taking risks with a photo, trying something weird and different, but when I have a model, I want to use the techniques that work, collaborate and make something I know will turn out well. It scares me to think of modeling for Suicide Girls, but it thrills me to think of shooting for them.

Now all I need is my very own Apnea. Any takers?
Collapse